- February 25, 2019
Every Monday, I will post a conception or concoction of some monster in my Arthurian setting.

Today, I tell you of the Goblin.

A man who refuses to give his life for an innocent lady is cursed by God, and thus, his offspring will be wrinkled distortions of humanity. And never again will he enjoy his wife’s bounty, for upon conception, the goblin begins its parasitic connection, snuffing out the mother as soon as it is removed from her – by birth or otherwise.

The birth of a goblin is rare, but it is horrific enough to ruin even a lord. The earth is not wanting for them either, as in days past before the Unification, men were blind to their cowardice, and the birth of goblins was a common occurrence for which the deceased wives were often refused burial, spawning specters of true horror.

These numerous goblins from the past have made unholy unions among themselves to propagate their kind, and today they plague the caves, woods, bogs, and wastes of Britain. They grow at many times the rate of a normal human, and so reproduce with urgency, quickly becoming a terrible pest.

Goblins are normally 3 to 4 feet tall. They have wrinkled, red skin that covers contorted faces, swollen joints, and twisted bones – like a child in eternal anguish. They worship devils and the spirits of the wood; they terrorize travelers; they steal crops and poison wells; they run naked through villages in the night, dropping torches in stables and wagging their genitals at young girls; they vanish into the night like the cowards from whom they came.

Goblins will only fight if they have the upper hand. If not they will flee and slip back into the shadows, waiting for a better time to strike, though they will always wait to strike, never retreating, always seeking revenge.

If a man yet lives, he can remove the curse on his offspring by slitting the throat of his very own goblin child.

There are even rumors that the blood of that goblin can be used to raise its mother from the dead, but that practice is abominated by the Church.

No. Appearing: 2d6, Normal: 11, Weakness (WIS): 6, Wounds: 2, Concessions: 1 (always fight), Special: A goblin can move out of melee with an opponent without provoking an opportunity attack if they attack the opponent first.

Humor of Goblin (Potion): The blood of a goblin can be used to make a potion which raises its mother from the dead. She must not have been dead for more than 1 year, and the potion must be prepared by a witch, as they are the only ones who know these foul magicks. The blood, mixed with water, salt, and the emulsified eye of her husband, must be poured into her womb.

Popular posts from this blog

A Terrain Generator for Hex-Based Maps 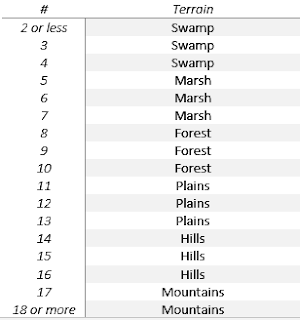 Terrain Generation for Hex Maps This terrain generation system is designed to create normally distributed terrain with realistic transitions in a simple and efficient way. Its product is one that can be easily adapted by the game’s referee to fit any preconceived ideas they may have about their terrain, as well as suggesting prominent terrain features and locations. One can expect to generate 30 hexes per minute. Generating Hexes To generate a hex, roll 3d6 on the Terrain Generation Table.  Whenever you generate terrain for a hex, add a modifier based on the hexes that surround it. Sum the modifier of each surrounding hex to determine the total modifier. For example. If a hex was surrounded by Mountains, Mountains, Plains, Marsh, and two empty hexes, you would only +3 once for the Mountains, +1 for the Plains, and -2 for the Marsh, giving you a total modifier of +2. Procedure To begin, roll 3d6 on the Terrain Generation Table to randomly det
Read more

- February 21, 2019
A travelling musician leans against the bar, clearly inebriated and clearly confident. He woos a local maid, and tonight, they stay in the same room. The king's herald rides into town, dismounts his stallion, and unfurls a scroll. The pronouncement of the king's new tax resounds across the village. The villagers pay, and the rider leaves. They never asked to see the seal.  The Bard is a class versed in the written word. With your knowledge of lore, rhetoric, theology, and politics – plus whatever other niches you have mastered – you are more than ready to persuade, intimidate, and charm your way to the top. Overview Prime Requisite: CHA Minor Abilities: Hard-Headed, On a Roll, Way with Words, Harsh Truth. Special Ability: Polemics Hard-Headed Increase your Concession limit by 1. On a Roll Whenever you successfully make a point, you may make another different point (you can’t just say the same thing over and over.) Way With Words You may spend
Read more